Let’s face it. Relationships are HARD. Despite all our best intentions, regardless of how much we love the other person they can still be HARD.

No matter how great your relationship is there are still times when you argue when all you want is peace. Sometimes, when you really need to feel supported, it’s just not there. Sometimes when you’re feeling insecure and need a little reassurance you just don’t get it.

On top of that there are the times when someone behaves in a way that upsets you or annoys you. It’s hard enough to speak up when it’s someone you love and downright impossible when it’s your boss or your mother-in-law. How do you get them to stop what they’re doing without getting upset yourself, or without upsetting or angering them?

Standing up for yourself without upsetting others 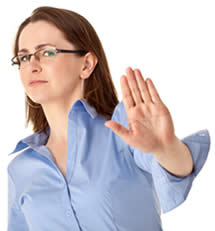 Well. Here’s the answer. This is the most powerful phrase in the English language. This diffuses all the emotion out of the situation. And it’s a phrase that is impossible to argue with.

So the next time someone behaves in a way that you don’t like say this:

Here’s how you apply it

Let’s say your husband (or wife) comes home and tells you he’s planning on spending Saturday with his friends when he’d previously promised to spend the day with you.

Now instead of sulking, ranting, or just feeling hurt and rejected silently. Here’s what you say

Or your husband (or wife) assumes that they can borrow your car. You say.

If you want you can soften it with an “I’m sorry…” if you want.

Try it next time someone does or says something you’re not OK with. Just tell them.

How to say no with grace

Have you ever found yourself doing things that you really don’t want to and wondering how that happened? You probably said yes when you wanted to say no but didn’t want to upset of offend someone. It happens in families and in business. As a business owner myself I regularly get approached by people who want me to promote them, give them free stuff, give them discounts as just a few examples.

But that simply isn’t the case. It’s possible to say no with grace. Here’s how – with some more words of power.

“That won’t work for me”

Again you can soften it with an “I’m sorry” if you want.